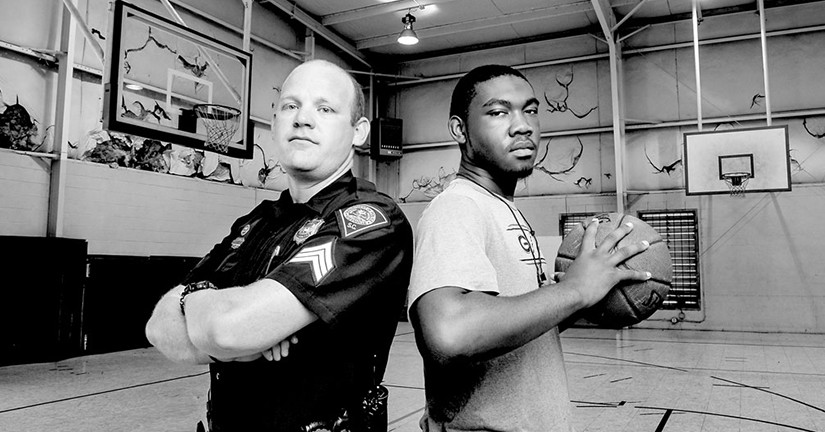 Read the full article on the Greenville Journal website.

For three hours on Friday evenings at Augusta Heights Baptist Church, Greenville Police Department officers swap their uniforms for gym clothes and play basketball with local at-risk youth through Cops on the Court, a program that provides both outreach and mentorship.

By presenting kids with an opportunity to interact with officers in a fun and relaxed environment, Cops on the Court aims to build relationships based on trust and understanding. Through this program, kids have an outlet where they aren’t potentially out on the street getting into trouble, and they can also make connections with positive role models.

The program, funded by the police department, was launched in July 2015 through a combined effort between Sgt. Ed Irick and Detective Andrew Smith. Smith and Irick were working together in the same zone on the community response team; Irick is the unit’s supervisor, and at the time, Smith was the community coordinator.

It is the police department’s hope that these relationships between officers and community youth will produce long-term effects that lead to a decline in neighborhood crime, violence and gang participation. “We believe that this program has the ability to change lives, even though it is only for several hours once per week,” says Officer Thom Sample, one of Irick’s partners on the community response team.

“It was really just to reconnect with the community, specifically reconnecting with kids,” Irick says regarding the motivation to start the program. “[It was about] breaking down the walls that have been built up.”

Augusta Heights Baptist Church donates the use of their gym space for Cops on the Court. When the church was approached to house the program, Pastor Greg Dover had just began his tenure at Augusta Heights. He welcomed the proposal.

“When I came to the church, I told them up front that we needed to be a community center where people could see us as a resource — where we’re not just a church but a part of the community,” Dover says. “I thought this was a great opportunity to start that relationship building.”

“We’re in a good location for their purposes, because we’re on the edge of a high-crime area in the city,” he adds. “And just with everything that has been going on nationally, it seemed like a good idea to make connections and build relationships and trust between police and the community … This is a good opportunity to create a different kind of community in Greenville.”

Be sure to read the full article on the Greenville Journal website!